Extract of presentation by Roger Corona

These portraits of people from the hardcore business are meant to be the meeting place of two worlds, the soft world of beauty, fashion and the artistic nude, and the hard world of pornography, explicit sex and scandal.

It all started by chance, as it often happens in life.

A friend, the director of Video magazine “put it out there”: “you are specialized in beauty, why don’t you photograph hardcore stars like you do with models?”. I liked the idea immediately, not out of itchy curiosity, but because it was intriguing.

The first set was organized in my studio, in that experience I behaved as if I had to produce a service for one of the women’s magazines with which I collaborate.

During the seance I tried to frame the environment in search of the graphic system, the shape, forgetting sometimes even the subject.

The women I have taken are pornodive, but there has been a shift of concept, difficult to make understand.

They did not play their part, indeed they all understood that it was a matter of posing in front of the lens with completely different intentions.

After the work, after about a year and a half, from an editorial idea of Daniel Filipacchi, the publishing house Hachette published: “Femmes Extremes”. 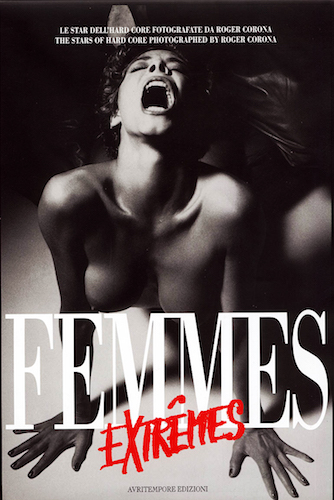 The written words that the latter dedicate to Roger Corona show their genuineness and the photographer’s wisdom. The provoking and provocative wild beast of sex Milly D’Abbraccio writes, “If life is movement, if my movement has been life, your lens was at that moment the mirror of my soul and my sex. And if all this was passion, our photos will become immortal. Many kisses sex!”

Milly is so fragile and affectionate, she talks about life in philosophical terms and then she adds that little word “sex”, so out of contest that it reveals a need to always play her role. It is perhaps the need to maintain a role that changed the exhibitionistic approach in front of the lens of Corona’s camera. In fact, in all the participants’ declarations resound with a leitmotiv of emotion and surprise, expressed by women who earn a living with pornography acted out in front of cameras and the naked eyes of people.

In these photos there has been an exchange of masks between person and character, exactly the opposite of what it usually happens in a photograph session of aspiring models, actresses and the like, by whom all kinds of magazines are invaded. Corona focused on the person born from the character.

Corona’s make-believe sado-masochism is so non-violent and well structured in its graphically designed approach that it charms for its elegant lines. As such it is a visual invention that remains unseen in other photographers’ work.

It is certain that with these women Corona has produced work that deserves to be attentively considered, with respect for its extraordinary quality.

This study of nudes, the body and female vitality (so rich in mysterious messages to decode that they might never be fully revealed) represents a new aesthetic contribution to the skill of portrayal.